I spent one week travelling in various places. The idea was to both take a break and meet people, both friends and people involved in games. It was quite fruitful : I met Francine and Nicolas from the Compagnie Caracol, working on games mostly connected to cities patrimoine, as well as Sylvain, working on a cooperative game based on superheroes, and Léo, an old friend of mine working on Honey rush, a game starring bees. 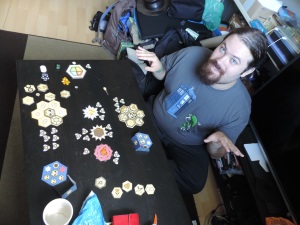 And then I crossed the border. 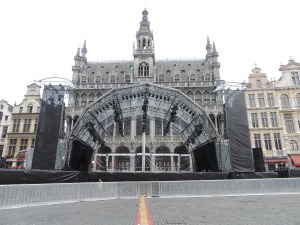 This week, I work with the association Let’s play together. Based in Bruxelles, they organize several events around board games such as game evenings, conferences and so on. So they invited me to come and set up several workshops with various people.

The first workshop took place in the Flamingo bar. 4 people were here, creating games around beers. I used the new workshop version developped in Besançon : they played and analyzed Dobble and Zombie dice, added new mechanics then started to create their own prototype. 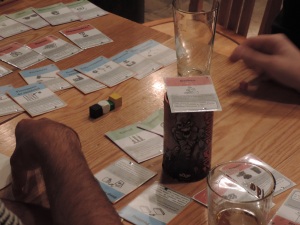 Everything went really smoothly. They picked the cards “Logic”, “Draft” and “Cubes” and I chosed the theme “Cactus”. They ended up creating a prototype and even testing it for a while. I was curious how a 4 people workshop could take work, but I ended up being pleasently surprised ! 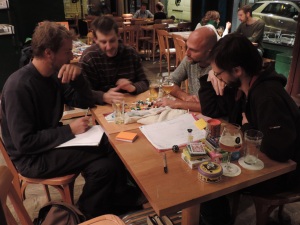 This is a game about water, cactus and drugs. Each player has to find drug cubes while digging in the desert. They move their pawn, roll a dice and pick as much items in a bag as the dice shew. In a bag, there is water, sand, drug and scorpios. Picking sand doesn’t serve any purpose, scorpios stop your picking operation, drug is the winning item (5 durg cubes = winning) and water allow you to move further. Each move costs you 1 water, digging also costs 1 water, each time you consume water you put it again in the bag. There’s also another bag you can only access if you dig on a cactus. Digging on a cactus uses 2 water. Also, there’s a maya temple warping you back home but granting you an extra dice roll. 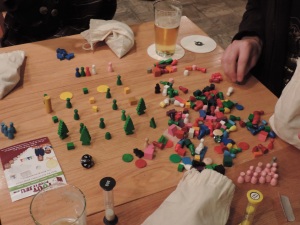 The next workshop will take place thursday evening in the Table food and games restaurant, rue de l’enseignement. Feel free to come !

(Actually, another one will take place today evening, but it’s quite crowded already !!)